‘A triumph’ (★★★★ The Guardian): Rave reviews for The Monstrous Child

Directed by Timothy Sheader, designed by Paul Wils and with libretto by Francesca Simon, the opera – about the Norse teenage goddess of the underworld, Hel – has been dazzling audiences and critics at a sold-out Linbury Theatre at the Royal Opera House. The Guardian called it ‘a triumph‘ whilst Culture Whisper called it ‘a spectacular new opera‘. Audiences too have been praising the work on Twitter. Conductor David Charles Abell loved the opera so much he came back a second time:

Author of How to Train Your Dragon, Cressida Cowell, tweeted:

Went to STUNNING performance of @gavhiggins new music for new opera of @simon_francesca s book ‘the Monstrous Child’ last night… congratulations to all involved, you must be so proud! — Cressida Cowell (@CressidaCowell) February 23, 2019

Broadcaster Zeb Soans was also in awe of the production:

Never has death been more beautiful than in The Monstrous Child by @simon_francesca and @gavhiggins at @RoyalOperaHouse Beg, borrow or steal a ticket for the few remaining shows #ROHmonstrous — Zeb Soanes (@zebsoanes) February 27, 2019

Whilst @NatRaybould was thrilled by the Monstrous Child:

Ok, so #rohmonstrous is the joint best thing I have seen in at least a decade. And I have seen a LOT of stuff, trust & believe. Audacious, technically faultless, utterly moving; luxury casting, design, direction. Libretto so often the poor cousin – here an equal 🌟 AMAZING STUFF — Natalie Raybould (@NatRaybould) February 28, 2019

#ROHMonstrous is contemporary opera as it should be. An imaginative, innovative & multi-faceted production of a story that is simultaneously pure fantasy and fully relevant. A stellar debut for superstar mezzo @MartaFontanals! Congratulations to @gavhiggins & @simon_francesca! 🍾

The Monstrous child runs till the 3rd March at the Royal Opera House, Linbury Theatre. 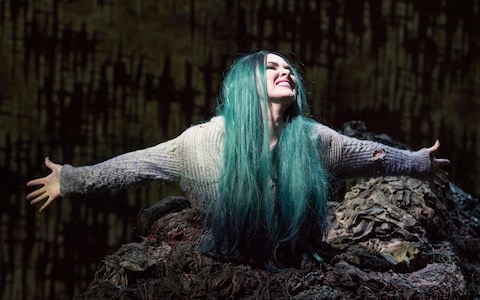